Infographic (part I - in Dutch) 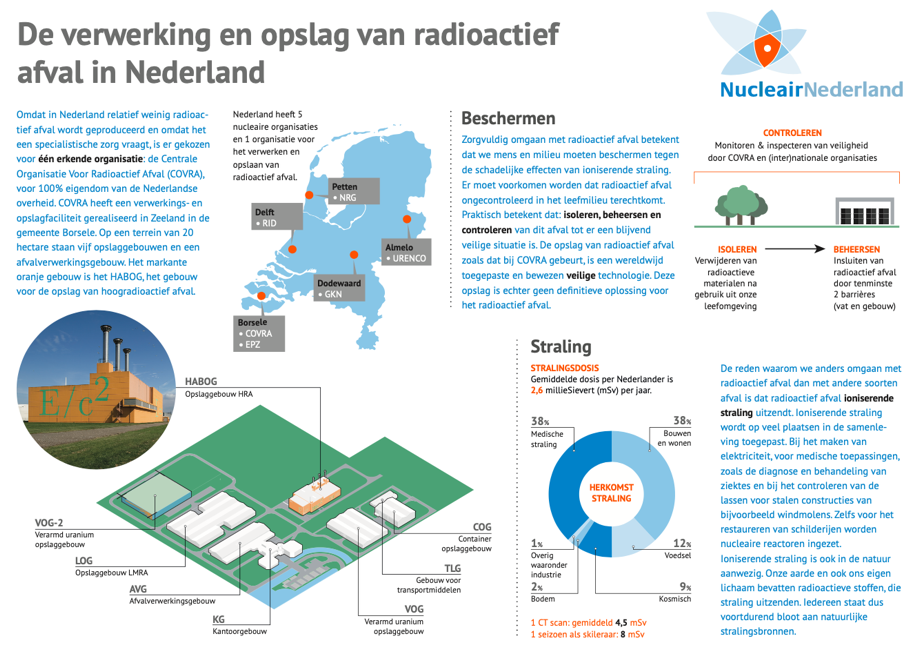 Because relatively little radioactive waste is produced in the Netherlands and because of the required specialist knowledge, in 1982 one recognised organisation that already managed all the waste in one central site in the Netherlands was chosen: the Central Organisation for Radioactive Waste (COVRA), which is located in Nieuwdorp in Zeeland.

COVRA continues to manage Dutch radioactive waste to protect people and the planet. All the radioactive waste is safely stored by COVRA in specially designed buildings for at least a hundred years. The waste is isolated in a central place, where it can be managed and controlled to guarantee safety over that long period. Eventually, the waste must be sent to a final disposal site. This guarantees that the waste will remain outside the living space of people for thousands of years.

In radioactive waste management, a distinction is made between two types of waste:

L/ILW can be solid or liquid. Flammable or inflammable, compressible or non-compressible. Each type of waste requires a specific treatment to ensure it can be stored safely. For low and intermediate-level radioactive waste, a concrete casing can contain the radioactive substances and reduce the radiation. This waste gradually decays in ordinary storage buildings.

NORM waste is a special category of waste. NORM stands for ‘Naturally Occurring Radioactive Material’. This is waste with natural radioactivity, for example depleted uranium and radioactive substances that are extracted in oil and gas production.

High-level radioactive waste
High-level radioactive waste (HLW) consists of recycling waste from nuclear fuel from Borssele nuclear plant and nuclear fuel elements and waste from the production of medical isotopes in the research reactors in Petten and Delft. Currently, around 110 m3 of such waste is stored at COVRA. That is equivalent to the contents of around one and a half sea containers. Every year, another 4.5 m3 is added.

Due to the high radiation level, HLW must be processed with remote-controlled installations and stored behind thick concrete walls. This is done in the HABOG, a big bright orange bunker with 1.70-metre thick walls, which can withstand natural catastrophes (earthquakes and flooding events) and man-made disasters (transport accidents and explosions). HABOG stands for High-Activity Treatment and Storage Building.

The HLW that produces heat is mixed in liquid gas and poured into stainless steel packing, where it solidifies into a basaltic material. The radioactivity is then sealed in the molecular structure of the glass, from where it can no longer escape. Over the coming hundred years, this waste loses its heat and most of its radioactivity, after which the waste is easier to manage. Non-heat producing HLW is stored without glass mixture in stainless steel packing.

In a stable underground layer of earth, for example clay, salt or granite, a specially designed repository is made to store the waste. After a while, this repository is hermetically sealed. Final disposal is currently the only scientific and technological solution that guarantees that the waste remains outside the living space of people for thousands of years. Coordinating research into final disposal is one of the key tasks of COVRA.

All reports about OPERA